Walmart Stock Analysis – Is WMT a Good Stock to Buy, Sell or Hold?

Wal-Mart (Stock: WMT) recently reported a 1.4% decline in its U.S. comparable (or comp) same-store-sales in Q1 2013. This is the first such decline in 6 quarters of Walmart reporting comp increases. Based on a recent report published by Bloomberg, it appears Wal-Mart is struggling to keep its stores stocked with items that consumers are seeking.

As seen in the below chart, Walmart’s tock, WMT, has been lagging behind its main competitors, Costco (COST) and Target (TGT).

Given the weakness in global economies, and cautious consumer spending in the U.S. (WMT's biggest market), investors might be wondering whether Walmart stock is a good buy, sell or hold. Does WMT stock still make sense as a good investment or should investors seek better opportunities somewhere else?

Let's analyze some of the valuation, fundamental and technical variables to better determine whether Walmart stock is a good buy, sell or hold?

WMT reported its Q1 2013 earnings on May 16th 2013, causing the price of its stock to drop by 1.7%, largely on disappointing U.S. comparable ("comp") same store sales numbers. While stock analysts were expecting some decline in the firm’s comp numbers, the reported 1.4% drop in comps took everyone by surprise.

Year-over-year (Y/Y) Net sales remained more or less flat at its U.S and Sam's Club operations, growing only by 0.3% and 0.1% respectively. On the bright side, the company reported good international Net sales growth, of nearly 3%, from $32B last year to $33.0B for the most recent quarter. On a consolidated basis though, total Net sales rose only by 1%, from $112.26B last year to $113.42B this year. More encouraging was the fact that e-commerce sales showed marked improvement, recording a 30% growth over online sales from the same quarter last year.

Walmart did report a slight decline in its Return on Investments (ROI), from 18.1% in the TTM ending Apr 2012, to 17.8% in the most recent TTM period, ending Apr 2013. However, this decline was mainly due to an increase in acquisition spending and higher capital expenditure (CAPEX/fixed assets).

Overall, these results were somewhat lackluster, but given the current economic situation, they could have been much worse.

At the time of this analysis, WMT is trading at a Trailing P/E multiple of 15.23x, compared to a T/PE of 25.63x for Costco stock and 15.42x for TGT. On this valuation basis therefore, both WMT and TGT seem to be evenly priced, with COST trading at a comparatively higher premium. The Morningstar industry average for this metric is around 17.3, which means WMT is currently valued at a slight discount to its other Industry peers.

On a Forward P/E basis too, both WMT and TGT are valued fairly evenly, at multiples of 13.22x and 12.72x respectively, with Costco stock trading at a premium at F/PE of 22.65x. Morningstar's average for the S&P 500 for this multiple is 14.6x, which values WMT at a slight discount to its S&P 500 peers.

On a TTM Price/Sales basis though, while Costco is trading at 0.48x TTM sales, both WMT and Target are evenly valued, at 0.54x and 0.60x respectively, though they are trading much higher (comparatively) to COST on this metric. 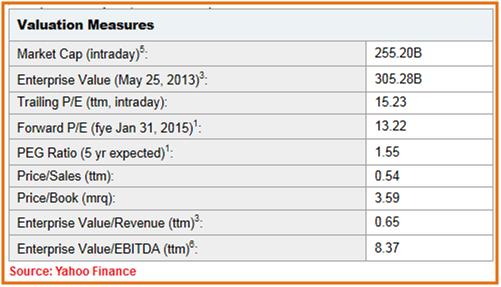 Investors looking to hold WMT as a long-term hold will likely want to know what the company's growth prospects are. Current Morningstar 5 year growth forecast for the company is rated at around 5.4%, the lowest of the three peers being compared here, with COST and TGT expected to grow their earnings at 13.7% and 9.5% respectively over the next 5 years.