What’s on the Horizon for Verizon? (Is VZ Stock a Buy, Sell or Hold?)

What's on the Horizon for Verizon? (Is VZ Stock a Buy, Sell or Hold?)

As Verizon Communications Inc. (NYSE: VZ) delivered its Q4-2012 earnings report, shareholders saw the company holding fast onto its dominance of the U.S. wireless and telecommunications space. However, despite its strong revenue growth and high customer acquisition rate in 2012, Verizon continues to face stiff competition and other economic headwinds.

As the stock price chart above indicates, VZ has been holding its own against its major competitor AT&T (T). However, the stock price for its other competitor, Sprint Nextel Corp (S), has been achieving new highs against VZ. In the backdrop of a significantly matured wireless and telecom market, looming sequestration cuts and local and global economic uncertainties, shareholders might be wondering what's on the horizon for Verizon, and whether the stock is a Buy, Sell or Hold?

There's no doubt that VZ closed 2012 on a high note, delivering an 8.5% increase in Y/Y Wireless service revenues for Q4, and a 4.1% Y/Y increase in Wireline consumer revenues. The Telco giant also saw its ARPU (Average Revenue Per User) increase to $105.63, up 9.5% on a Y/Y basis. All these positive developments came on the heels of hurricane Sandy, which saw meaningful damage to VZ's communications infrastructure, and the release of the iPhone 5, which also took its toll on wireless revenues.

On a consolidated basis, covering all 3 lines of businesses (Wireless, FiOS and Enterprise), VZ reported $30B in revenue for Q4, a 3.5% increase over Q3-2012 total revenues of $29.0B and a 5.7% Y/Y increase from the same quarter of the previous year. Overall revenues for 2012 came in at $115.8B, up 4.5% on a Y/Y basis compared to 2011 total revenues of $110.9B. This also took into account some non-operating challenges, including pension fund adjustments and other pension liabilities that the company had to fulfil. 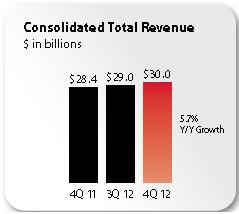 As noted earlier, VZ saw healthy Y/Y revenue growth in each of its 3 strategic business areas, including: 8.5% growth in Wireless services, 15.7% increase in FiOS and a 5.3% rise in Enterprise services.

The company reported an adjusted EPS of $2.24 for 2012, which was a 4.2% increase Y/Y, when compared to 2011 adjusted EPS of $2.15. Had it not been for the devastation caused by Super storm Sandy, which wreaked havoc on a wide range of its infrastructure, the company's management estimates it would have added an additional $0.07 to its EPS, which could have come in at $2.31. Ironically, in 2011 VZ also faced storms that, along with a crippling strike by 45,000 company workers, ate into its EPS by $0.05. 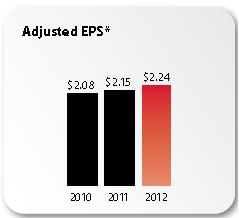 The company reported a net addition of 5.0M net postpaid wireless customers in 2012, which was a 4-year high. Service revenues in the Wireless segment were reported at $63.7B, which was a 7.7% Y/Y increase. This accounted for a Y/Y EBITDA growth of 15.2%, and an expansion in EBTDA service margin of 180 bps.

Unfortunately, the 2012 Revenue narrative for VZ's Wireline business was not as bright. The company reported Wireline total revenue of $39.8B for the year, which was a 2.2% decline from the $40.7B reported in 2011. The segment EBITDA, reported at $8.5B and a 21.3% margin, also saw a 9.9% Y/Y growth decline from 2011. However, despite the devastation and disruption caused by Super storm Sandy, VZ saw a 4.1% Y/Y growth in consumer revenue. It's FiOS internet business now boasts 5.4M subscribers, of which 144,000 were new additions in 2012. The company also added 134,000 new FiOS Video subscribers, taking its total tally to 4.7M subscribers in 2012.

Data from Yahoo Finance indicates that, on a TTM P/E basis, VZ is valued significantly higher than any of its competitors, and even trades at a significant premium to the Industry. However, when looked at in light of a 5 year expected PEG basis, the stock seems fairly valued on a competitive basis. On a TTM P/S basis, VZ trades in line with the Industry average, is more favorably valued than AT&T, but is valued at a significant premium to Sprint. 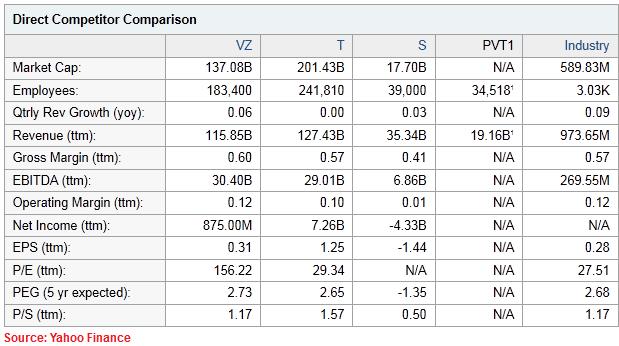 Many shareholders and prospective investors would prefer to look at the stock's value using slightly different valuation metrics. Comparative results for VZ, T and S from Morningstar.com indicate that:

Investors wary about a company's liquidity and debt usually like to value a company based on its Debt/Equity ratio. At 1.4x more debt than equity, VZ has relatively twice more debt than T (at 0.7), but is in a much better liquidity position than S (with a D/E ratio of 3.4).

Overall, given VZ's market position, its strong balance sheet and its 2012 financial and operational performance, we would say the stock is fairly valued.