Why the US Stock Market Rally Continues, even as Economic Data Disappoints 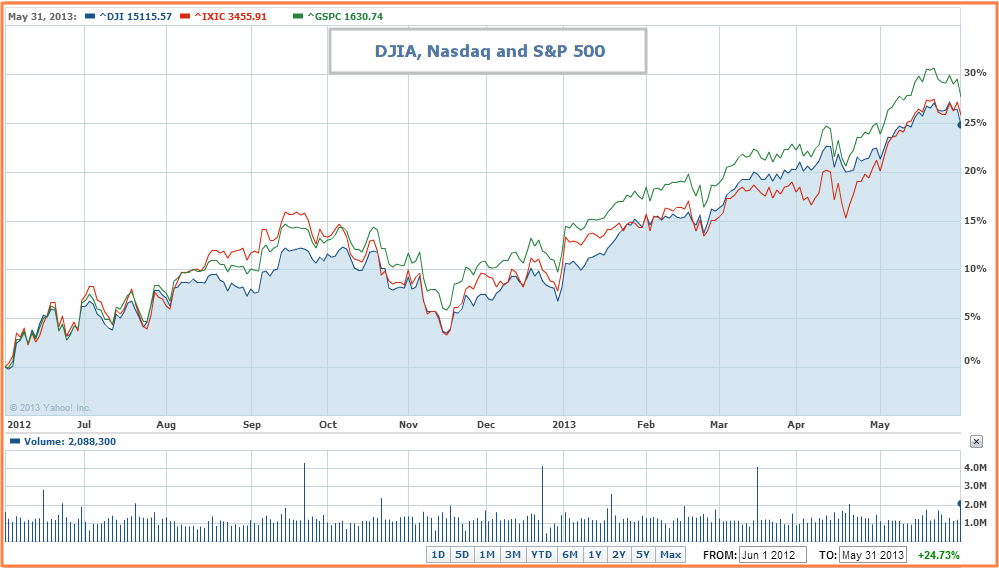 The latest GDP report by the Bureau of Economic Analysis shows that “US Q1 GDP growth was revised down to 2.4% from the initial 2.5% estimate published a month ago. Yet the rally continues with the DJIA surging 24% since June of 2012.

"U.S. factories in May posted their worst month since the end of the recession. The ISM (Institute for Supply Management) on Monday said its broad index, in which any reading below 50 indicates contraction, fell to 49 from 50.7 in April — the first decline since November. The reading, based on a survey of corporate purchasing managers, is the lowest since the recession ended in June 2009”. And yet the stock market rally continues to chug along.

One important and often-cited reason for the relentless upward move of the US stock market is the Federal Reserve’s “quantitative easing” programs. Just as a review, quantitative easing is what happens when interest rates are at, or near, zero and the central bank can only further stimulate the economy by printing money. Beginning in 2008, the Fed has gone through several rounds of quantitative easing, printing piles of cash to fill up the holes caused by the bursting of the housing bubble.

And it is not only the U.S. central bank that has been creating money. The European Central Bank, the Bank of England, and, most dramatically, the Bank of Japan have all been in on the act. Of course, each of them will eventually need to turn off the printing press, but that day appears to be far into the future. “The Bank of Japan (BOJ) recently increased its purchase of government bonds by 50 trillion yen ($520bn; £350bn) per year, while the US Federal Reserve has kept its $85bn-a-month bond buying in place.”

(See Also: Is Gold Still a Good Investment? Or is it Time to Sell Gold and Buy Stocks?)

Much of the liquidity that the US Federal Reserve is injecting into the US economy has ended in the stock market; going into shares like BAC (Bank of America), GOOG (Google) and other publicly traded companies. Some analysts have noted a strong correlation between the Fed’s activities and the performance of the US stock market. “Monetary stimulus has contributed to stock market gains this year, with the S&P 500 up about 17% and the FTSE 100 at a 12-year high.”

All that money does not necessarily have to flow into stocks and, in fact, some of it has gone into the bond market. Some investment funds are required to buy bonds according to the terms of their prospectus. Others have been buying bonds because they have been more interested in the return of their money than the return on their money.  But with interest rates so low, most investors see the bond market as being relatively unattractive.

There was some hope, perhaps unrealistic, that a good portion of the money the Fed was injecting into its member banks would be used to provide loans to businesses and consumers. That has not happened because fewer borrowers are creditworthy. Nevertheless, the Fed is implementing a fundamental economic policy of wealth creation via the stock market, with the expectation that as individuals become wealthy, they will increase their overall purchases and spending. Such a situation will subsequently help drive higher GDP and stronger economic growth.

So, with a lack of good investing alternatives, much of the “Monopoly” money the Fed has created is being shoveled into equities, leading to a continuation of the rally in the US stock market.

While the impact of quantitative easing cannot be understated, there is another important factor responsible for the market’s melt-up this year. It is something that has been largely unreported by the mainstream media and which may surprise you: the incompetence of hedge funds.

Yes, hedge funds. These are the exclusive, big-money investment funds managed by the “best and brightest” in the business. They are equally famous for their “two and twenty” fee structure – an annual 2% fee on assets invested in the fund, plus 20% of any profits generated.

We will revisit that fee structure in a moment, but first let’s look at a problem shared by both professional hedge fund managers and individual investors. The fear of losing money has turned into a fear of missing out.

According to data from the Investment Company Institute, retail investors withdrew $128 billion from equity mutual funds in 2011 and another $153 billion in 2012. It took until January of this year for individual investors to finally turn bullish and produce modest inflows into the stock market.

Likewise, many hedge funds had structured their portfolios to take advantage of an expected crash, major correction or pull back in the equity market. Such a major pull back, of course, has not come – not yet, anyway. Slowly and one-by-one, these hedge funds have admitted defeat and crossed over to the bullish camp, bringing the full force of their capital with them.

This is where those hefty hedge fund fees come in to play. Data from Dow Jones and Credit Suisse indicate that nearly two-thirds of hedge funds lost money in 2011. And in 2012 hedge funds produced a gain of only 7.67%, far below the close to 12% that could have been gained if an investor had simply bought and held the S&P 500 in January of this year. Investors in these funds are now questioning what they are getting in return for those exorbitant fees.

Professional money managers who have produced subpar results in the last two years (in other words, most of them) are really feeling some heat now to justify their existence. They are getting desperate to catch up with a bull market that their economic models say should not be happening. And it is why every small dip in the stock market this year has been met with a wave of new buyers to push prices higher and higher.