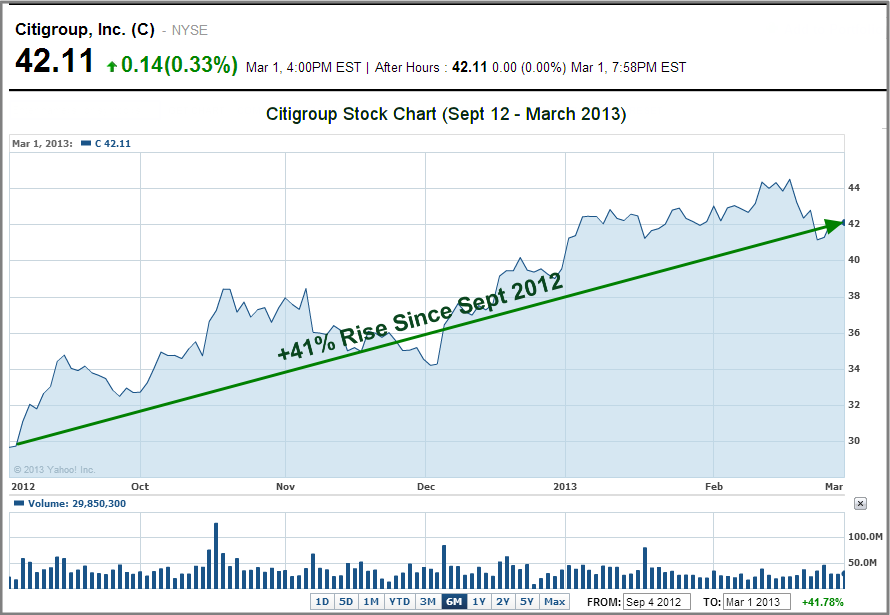 Continuing from previous article: Citigroup Turns its Business Around. Is the Stock (C) a Buy/Sell/Hold?

The decision by Citi's new management to focus on operational cost-cutting and improved efficiencies have resulted in a stronger capital structure and an improved balance sheet for Citigroup. In addition, the successful repositioning of the firm's core banking activities has enabled Citi to position itself for future growth. For instance, continued improvement in the firm's Securities & Banking and Global Consumer Banking segments over the past 4 quarters will act as positive growth catalysts in 2013 and beyond.

From a downside perspective, the most significant negative catalyst to Citi's accelerated growth is likely to be its "toxic" Citi Holdings assets, which make up nearly 8% of the Bank's balance sheet. It's true that in 2012 Citi managed to jettison almost 31% of these toxic holdings, but the remaining holdings, of which North American mortgages comprise a large percentage, will continue to have a drag on profitability. Expediting the reduction of the remainder will definitely help, but as CEO Mike Corbat indicated: there is no silver bullet to immediately resolve this situation.

As more of Citi's revenue growth comes from international markets, especially in Asia, there could be significant catalysts, both favorable and non-favorable, in store for the bank. For instance, regulatory hurdles in markets like Korea, or slowing consumer economic activity in China, could impact consumer banking and credit card operations. Conversely, if economic activity in those regions pick up, and if there is a return to a high interest rate environment, the bank is well position to benefit.

While the Federal Reserve's recent announcement to continue its status quo on monetary easing is a welcome sign for Citi, the upcoming sequester spending cuts will siphon an estimated $55B to $60B out of the U.S. economy. This will certainly have a knock-on effect on small businesses and consumers, who make up a significant part of Citi's clientele, and could prove to be a negative catalyst to growth projections.

In light of the analysis above, we rate C as a MODERATE BUY for now, with a strong recommendation for investors to watch the US (budget cuts and sequester developments) and international landscape (Italian political scene and other developments in France, Spain) to see what impact they have on global financial institutions.