Since March 2011, Corning stock (GLW) has been on a 45% decline. In January of 2013, Corning reported Q4 sales figures of $2.15 billion, a 14% increase from Q4-2011 numbers – the largest quarterly sales increase in Corning history. Due to a lot of factors, however, investors do not seem very excited about Corning stock and are questioning whether Corning stock (GLW) is a good Buy, Sell or Hold? Will GLW stock rise again, after falling 45% in two years?

A couple of days ago, TheStreet.com reiterated their Hold ratings (Ratings score of C+) on GLW, stating that “the company's strengths can be seen in multiple areas, such as its revenue growth, largely solid financial position and attractive valuation levels.” However, as a counter to these strengths they also highlighted weaknesses “including deteriorating net income, disappointing return on equity and a generally disappointing performance in the stock itself.”

Corning is a major player in the specialty glass and ceramics industry. It manufactures, produces and sells glass substrates used to produce LCDs (Liquid Crystal Displays). LCDs are used in a vast range of consumer products such as mobile and electronic devices, etc. The firm is also involved in telecommunications and provides bandwidth and telecommunications network solutions. 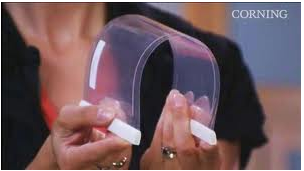 The firm’s reportable segments are as follows:

On February 13, 2013, Corning filed its Form 10-K (Annual Report for Full Year 2012). Looking at the below screenshot of GLW’s consolidated income statement, two conflicting trends immediately jump out at you. 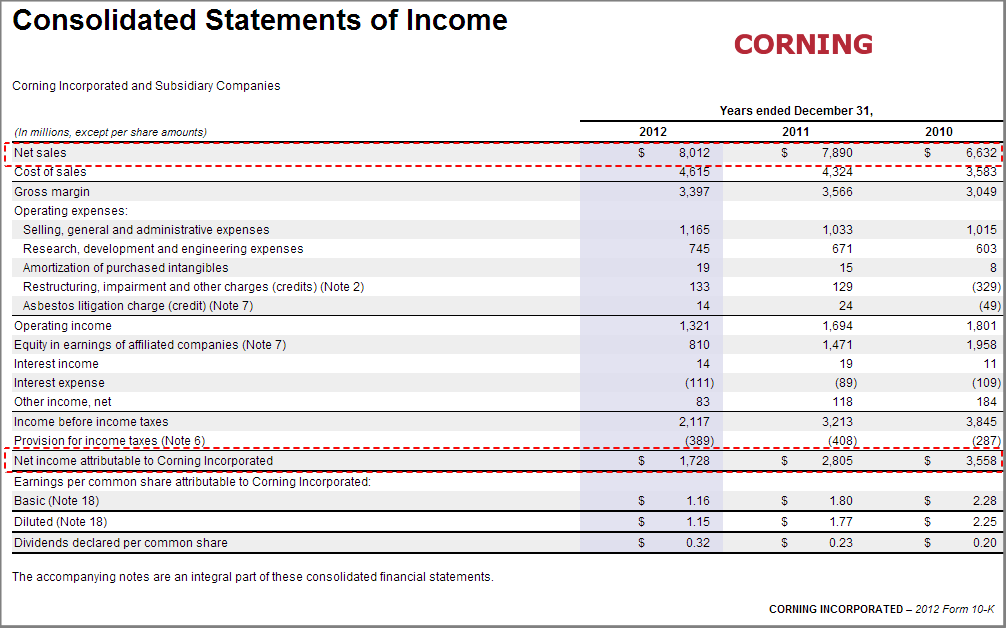 When determining the value of a stock, investors normally consider some distinct variables in their valuation analysis. These include a firm's financial margins, management effectiveness, growth rates, return on investments and other valuation matrix (EPS, P/E, Debt Ratio, etc.).

For the last twelve months (trailing twelve months: ttm), GLW experienced a negative EPS Growth of -35.24%. At the same time, however, the industry (Electronic Equipment, Instruments & Components industry) as a whole experienced a 70.65% average increase in EPS growth. Corning’s underperformance of the industry and declining earnings growth is a major factor contributing to its declining stock price. In addition, the industry had an average revenue growth (ttm) of 3.21%, while GLW only showed a 1.55% growth in revenue, once again underperforming the industry in which it does business.

GLW has a Return on Equity (ROE) of 8.10%, and shows a positive Return on Assets (ROA) of 3.26%. ROE and ROA are variables used by investors to determine management effectiveness. For each $1 of equity, GLW’s management is earning $0.081 and for each $1 of asset, management is earning a return of $0.0326. Compared to the industry, however, Corning is below average in management’s ability to manage the firm’s resources. The industry has an average ROE (ttm) of 10.79%, while the industry’s average ROA (ttm) comes in at 4.58% 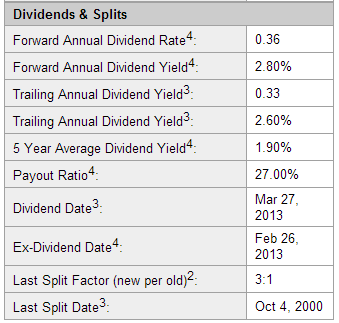 Stock analysts consider GLW a Moderate Buy. Between a 1 (Strong Buy) and a 5 (Strong Sell), they rated the stock a 2.09.

“We are not without challenges in 2013 as we continue to face an uncertain global economy, but we enter the year with prospects for growth in Specialty Materials, Telecommunications, Environmental Technologies and Life Sciences. In our LCD glass business, we expect our market share to be stable, and price declines to be moderate.”

Taking the various fundamental, valuation and other analyses into consideration, MarketConsensus Stock Analysis Team rates GLW as a HOLD. We do not see much justification for a higher rating for the stock at this time. However, we will continue monitoring the firm’s financial prospect and a major improvement in the firm’s bottom line figures (net income) will warrant a change from HOLD to moderate BUY.