Is Zynga Still King or is the Zing Gone? Is ZNGA Stock a Buy or Sell?

For a long time, Zynga Inc (NASDAQ: ZNGA) has held a leadership position in the social gaming arena. As a pioneer in the field, the company leveraged its relationship with social networking mogul Facebook to cement its position in the "Free to Use" gaming space. Its success can be measured by the fact that at the end of 2012, 5 of the top-10 Facebook games were produced by Zynga. An impressive achievement by any measure!

The above graph shows, however, that Zynga's stock hasn't been performing well at all against some of its competitors like Electronic Arts Inc. (NASDAQ: EA) and Baidu, Inc. (NASDAQ: BIDU). The question that investors are asking is: despite successes such as CityVille, FarmVille, and Texas Hold 'Em Poker, is Zynga still king, or is it losing its zing?

Let's review some of the facts to see if ZNGA stock is a Buy, Sell or Hold for investors.

ZNGA reported fourth quarter revenues of $311M, which came in flat on a year-over-year (Y/Y) basis. What is more concerning to analysts, however, is that the company reported Q4-2012 bookings of $261M, which represented an approximately 15% Y/Y decline. On a full year basis, ZNGA saw moderately good news as the company's revenue was up 12% on a Y/Y basis, coming in at $1.28B. However, the Q4 erosion in bookings flowed through the annual results, which saw a 1% decline in Y/Y bookings at $1.15B.

Operationally, while the company successfully launched 6 additional games in Q4, investors would be troubled by two other metrics that the company reported: Daily Active Users (DAUs) and Monthly Active Users (MAUs). While DAUs increased 3% on a Y/Y basis in Q4, they have been down 6% since Q3-2012. MAUs were up 9% on a Y/Y basis in Q4, but were down 4% on a consecutive quarter basis.

The charts above show two fundamental measures most investors like to assess when making an investment decision. While ZNGA has shown marginal improvement in its Operating Margins (measured in terms of positive values), its Profit Margin still remains a flat line of concern.

A line-for-line comparison (above table) of some of the key fundamental measures of ZNGA and two of its peers shows ZNGA to be a clear laggard amongst the group. All of its metrics point to a once dominant player in the social gaming space that's clearly struggling to maintain its form.

Comparing valuation on a Forward P/E and a Trailing Price/Sales basis for the two rivals shows that ZNGA is valued higher than its rival. This means shareholders will be paying a higher premium, against both metrics, if they decide to invest in ZNGA. Valuation on future earnings growth potential also leaves no doubt that the future for ZNGA, purely based on the numbers, looks bleak. 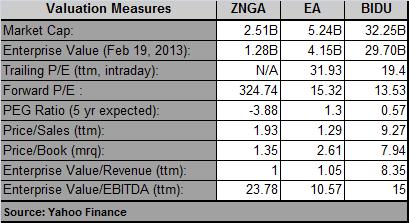 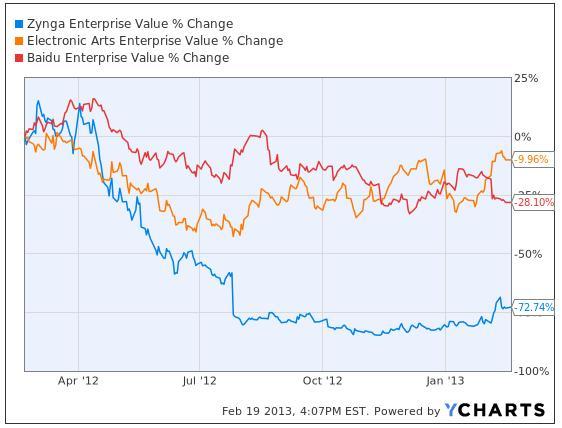 Based purely on valuation at current prices, therefore, ZYNGA does not offer a compelling investment thesis for potential investors.