Tesla Stock Analysis | Is TSLA a Buy or Sell at Current Prices? 525% Surge

In the past one year, Tesla stock (TSLA) experienced an astonishing + 525% surge, based on multiple factors, as presented in this article.

However, a couple of days ago, TSLA shares experienced a fiery bump, as investors rushed to sell the stock.

This reaction was based on news and a video that went viral of a Tesla electric car catching fire and going up in flames. 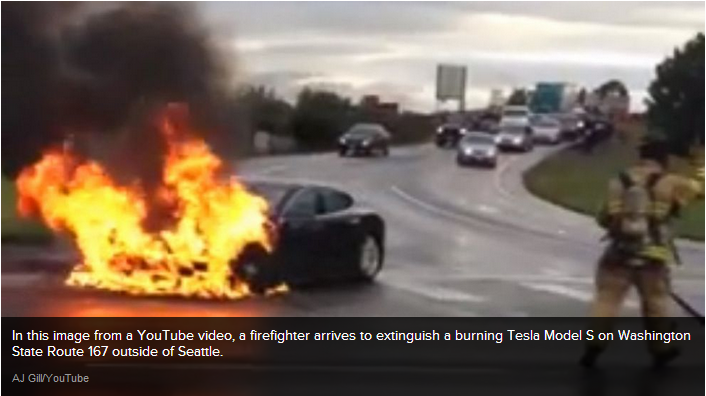 Within days, Tesla Motors’ share price plunged by 12.3% as investors scrambled to re-analyze the long term effect the accident would have on the company’s ability to sell its electric cars.

Three days after it began its descent, the stock halted its fall and started to rise as bargain hunters and other investors rushed in to snap up TSLA shares. 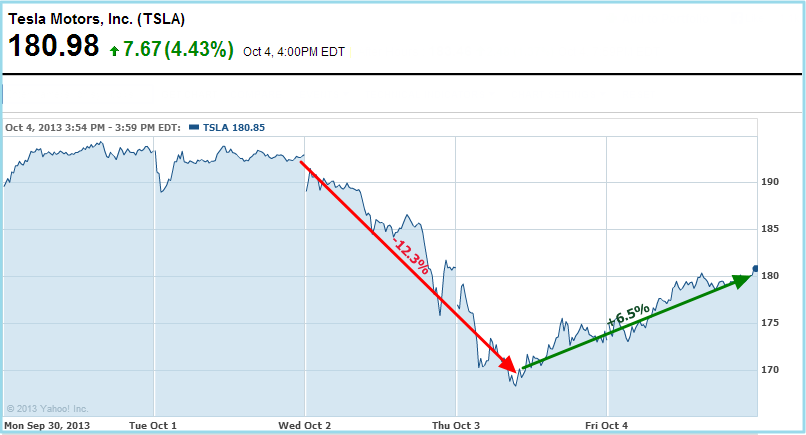 "For consumers concerned about fire risk, there should be absolutely zero doubt that it is safer to power a car with a battery than a conventional gas-powered vehicle”, Musk said in an analysis post on Tesla's website.

Due to the more than 525% rise in the stock price and the recent concerns, individual investors might be wondering whether to continue buying Tesla Motor shares or take some profits off the table.

Will TSLA share price continue to rise, or is there a major downfall just over the cliff?

Let's review the firm’s fundamental and valuation variables to better answer whether TSLA is a good buy, sell or hold.

After becoming profitable in the first quarter of this year following a streak of three consecutive loss-making quarters, TSLA stock investors were hoping that the dark days of losses were behind them.

Unfortunately that was not the case when the company released its Q2 financial results in early August.

Tesla Motors was back in the red, reporting a GAAP Net Loss of slightly over $30M.

However, that didn't seem to dampen investor expectations as the shares surged nearly 14%, a day after the firm’s financial results were released. 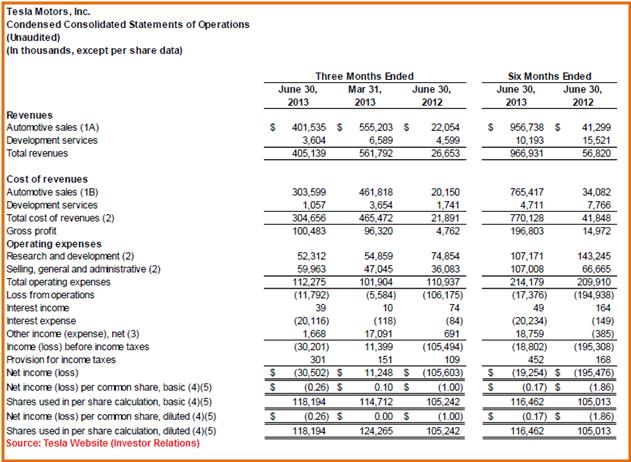 Investors were more interested in other fundamental figures than the GAAP numbers.

While the GAAP numbers showed a 26 cents loss per share, non-GAAP figures yielded a Net Income of 22 cents per share (a 70% Quarter over Quarter rise – USD).

Analysts had been expecting a non-GAAP loss of roughly 17 cents a share, with the resulting surprise to the upside driving the share price higher.

Investors were also excited about the company’s positive operating results, with a sale of nearly 10,500 units of its flagship Model S electric vehicle during the first 6 months of the year.

With a starting price tag of upwards of $70,000, TSLA management reiterated their forecast of selling nearly 40,000 Model S vehicles (on an annualized basis) by late next year.

The momentum is expected to continue as the company expands its Asian and European marketing efforts, which should add to the bottom line in subsequent quarters.

In an effort to strengthen its Balance Sheet, Tesla Motors had undertaken an equity issue (sold stock) in May, along with some debt.

It used these proceeds to pay off an outstanding government loan of $440M, becoming one of the only companies, amongst nearly 33 others that received taxpayer funding under the clean energy investment program, to have repaid its taxpayer liabilities.

The company ended its second quarter with $750M in cash, and with no government debt on its books.

TSLA currently trades at a price of 37 times its Book Value.  This makes Tesla shares 95% more expensive than the industry’s Price/Book average value of 1.8x.

The stock currently has a Price/Sales valuation of 16.3x, which is also higher by roughly 94% compared to the Industry Average of 0.6x.

Tesla’s other competitor Toyota Motor (TM) trades at a Price/Book valuation of 1.6x, and has a Price/Sales value of 0.9x.

On a current valuation therefore, TSLA is a far more expensive stock than its competitors. But this is because investors are pricing in a continuation of Tesla Motors’ high growth rate.

Companies with high growth rate are normally worth a lot more in the future than companies with lower growth.

As such, investors are willing to pay more today for such high growing firms. Which is why TSLA is trading at 200x its forward earnings, while GM and TM are trading at the low digit valuations.

A year ago, the stock closed at $29.16 which puts the current price approximately 555% higher on a year-over-year basis.

Throughout this period, the stock has consistently traded above its 50-day, 100-day and 200-day Simple Moving Averages (SMAs).

On a technical basis therefore, it would seem that this stock is set to make new highs

Several consecutive profitable quarters, with strong car sales would warrant a change in the above rating to a STRONG BUY.

Sound off below. Do you think Tesla stock will continue to rise? Why or why not?

Looking forward to your input,