Apple (AAPL) at a Death Cross. Time to Panic?

Technical analysts normally see this as a sign to sell and start pulling sell triggers, an action that normally causes the price of a stock to fall further. 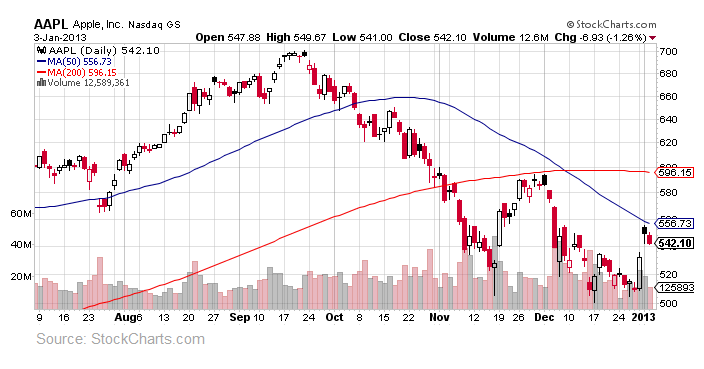 Such was the case last week when AAPL’s stock faced relentless selling pressure. As noted by CNBC reporter John Melloy, “Forget the ‘fiscal cliff. The real panic on Wall Street is over Apple's stock. Nearly every mutual and hedge fund has piled into Apple during its spectacular rise over the past few years. Now, these same funds are scrambling for the exits as the stock goes through an equally spectacular decline.”

It is clear now that Apple’s stock peaked on September 19, 2012, as it has been on a downward spiral ever since. Some argue that Apple has entered a period of slower revenue growth and is becoming less innovative. I disagree. Apple continues to have strong fundamentals and its products have never been as popular as they are now. Stock analysts have marked the stock as dead so many times in the past, but the stock comes back up every time and surpasses its previous high.