Why is General Mills Stock Rated a Moderate Buy?

With a current market cap of $30.4B, General Mills (GIS) is a formidable player in the Packaged Foods industry.

Although rising food inflation and the global economic crises have put pressure on the overall industry, GIS seems to be weathering the storm fairly well, with the stock price up more than 30% since October 2013.

Morningstar research puts GIS's YTD growth rate (including dividends) at 21.13% compared to the Industry's 12.85% average. Investors may now be wondering what the future holds for this Packaged Food industry star.

Based on the below analysis on General Mills, MarketConsensus is placing a moderate buy rating on GIS stock.

Over 6 trading sessions leading up to (and including) the earnings release date the stock gained almost 3% in value, with its price rallying 37 cents on the date itself. 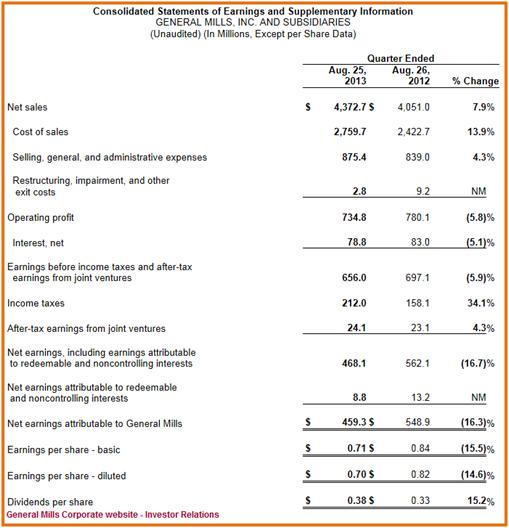 For the period, net sales registered an 8% increase over the previous year, which was helped by a 5% boost received by the newly acquired businesses of Yoplait and Yoki.

On a segment basis, international net sales registered the most growth (21.7%), with U.S. retail sales growing only by a modest 3.6%. The convenience stores & food services business saw a slight decline (0.8%) in year/year sales.

The company however saw a 6% decline in operating profit which management attributes primarily to the accounting treatment of mark-to-market for certain forward commodity purchases, as well as rising food inflation.

However, compared to net sales, operating profit declined only 250 basis points, with gross margins dropping by 330 basis points on a year/year basis.

Its international business however saw a slight shrinkage (0.2%) in operating profit.

The company also reported a 4% increase Y/Y in its after-tax earnings from joint venture businesses.

These include partnerships with Haagen-Dazs Japan (HDJ) and Cereal Partners Worldwide (CPW).

The company also reaffirmed that it was on track for low-single digit and mid-single digit growth in net sales and segment operating profit respectively.

Based on Morningstar data GIS currently trades at a Price/Earnings valuation of 18.1x, which makes it a less expensive stock than the 19.9x Industry Average valuation for this metric.

GIS also compares favorably to the 18.7x and 22.7 times P/E valuation of competitors DANOY and K respectively. The stock is however comparatively more expensive on a Forward P/E valuation basis (15.5x) compared to DANOY (3.8x) and K (14.5x).

On a Price/Book valuation GIS (4.5x) is significantly cheaper than rival K (8.4x). However, it compares favorably with the Industry Average (4.2x) and is only slightly more expensive than DANOY (3.1x).

Based on its 2.0 PEG Ratio, GIS certainly looks to be a more expensive stock when compared to DANOY (0.4) and K (1.4). However, yield investors may find GIS's 2.9% yield slightly more attractive than the Industry Average yield of 2.1% and DANOY's 2.0%, but only marginally lower than K's 3.1%.

As is apparent from the chart above, the stock has traded above its 50-day Simple Moving Average (SMA) for most of the time during the period Oct 2012 to April 2013, generally moving higher.

Ultimately, however, the stock did break that resistance in early July when it saw a short streak of upward momentum. The uptick was short lived as the stock took a nearly 5% dive in a short trading span of 5 days , from $52.05 on Aug 14 to $49.50 on Aug 19, at which time it broke support at its 50-day and 100-day SMAs.

From mid Aug to mid Sept the stock seemed to have been building a nice base, rewarding investors with the inevitable breakout above its 100-day resistance on Sept 17 on the heels of good Q1 2014 earnings. However, that sentiment quickly dampened as the stock once again broke below its 100-day SMA and seems to be trending lower.

Investors would be best advised to watch the stock carefully to see whether it starts building a base at current levels, poised for a break out. If however the fall continues, we could see GIS breaking below its 200-day SMA and headed for new lows below the $47 level.

As the second-largest manufacturer of packaged cereals in the US, GIS has forged an extremely profitable partnership with Nestle SA (NSRGY) that has seen its cereals distributed in over 130 countries.

One of the most favorable catalysts for the company is the almost household "must have" status of many of its brands, including Cheerios, Progresso Soups, Green Giant veggies and the Mexican food brand Old El Paso. This powerful brand recognition and fierce consumer loyalty that it has earned for the company is a powerful catalyst for continued market share growth and earnings.

The company also enjoys two other favorable catalysts – the world's obsession with "Meals to Go" and "Healthy Meals" – both of which GIS is ideally positioned to leverage. The company earns more than 40% of its revenue from canned foods (soups) and quick-prepare cereals, confirming that its marketing group has recognized the trends and are capitalizing on them.

GIS has had its share of missteps though. As a result of depressed economies coupled with global inflation, prices of inputs into the company's packaged products, including commodity prices, fuel and packaging, soared.

Hoping to ease the company's bottom line pressures, they decided to pass some of the cost increases to the consumer in terms of product price increases. This was a huge mistake, which saw consumers scale back purchases, eventually hurting sales.

While commodity prices are on a recovery path, and the company has rationalized its product prices, such tactics can easily put huge (and irreversible) dents into consumer loyalty leading to longer-term losses.

A major strength that the company possesses is the availability of a huge war chest for product development and innovation. However, the company was slow to recognize a growing trend and entered the Greek Style yogurt market a bit too late, even as some of its competitors introduced such products ahead of it. While GIS has now entered the Greek style yogurt market with full gusto, such missteps could prove to be catalysts for missed opportunities and revenue.

Strategic acquisitions, including the likes of the Yoplait and Yoki brands, positions GIS in a great spot to take advantage of the inevitable global recovery (especially in emerging markets and North America). Such a "growth by acquisition" strategy, although fraught with integration risks, can be a catalyst for tremendous future growth if executed well.

The company also faces some potential regulatory headwinds too. While California's Proposition 37 referendum was decided in favor of not requiring companies (like GIS) to change product labeling with respect to genetically modified ingredients, the results were hardly a landslide victory (51.5% against, 48.6% in favor).

In the future, state governments, and for that matter other state legislatures, could potentially reintroduce such requirements. This would not only increase production costs but may also drive away potential consumers from buying genetically modified foods. This could hurt the company's revenues.

Based on the above analysis, we have rated GIS as a MODERATE BUY. Investors should watch for signs of rising food inflation globally, and gauge the ability of food manufacturers like GIS to pass on rising costs to its consumers.