Apple – Moving from Most Valuable Stock to Good Value?

Apple’s earnings report on Jan 23 2013 was a disappointment to the market, and the stock plunged 12%. Investors are now left wondering whether AAPL will rise again in 2013. Has it become a “value stock” or will it continue to offer growth prospects as a “growth stock”?

Let's take a look at whether Apple stock can make the transition from "most valuable" to being "truly valuable" to shareholders and investors, despite AAPL suffering a drastic decline of over 37% from record highs in September of 2012.

The Value versus Growth Debate

Earnings for AAPL's Q1-2013 (ending Dec 2012) were a bit of a disappointment to analysts, as the company has now failed to deliver on sales forecasts for the third consecutive quarter. What is more concerning is the guidance that management has provided for Q2-2013, which clearly outlines weaker sales traction for its flagship iPhone. This confirms the case that AAPL might be less of a growth story and more of a value play in the coming years. Slowing growth in iMac sales, down 18% since last quarter, are also indications that future growth may be harder to come by.

AAPL reported 47.8M units of iPhone sales (a 29% increase from the previous year), while the Street anticipated sales of about 50M units (compared to the 37M shipped out last year). The company reported sales of 22.9M units of iPads, also below Street consensus of around 24M units.

To add to this disappointment, the average selling price of iPads was 21% lower than a year ago. Here too lay signs of stagnating growth for the juggernaut of the tech world. In the coming years AAPL will need to see substantial sales growth from cheaper models of its iPhone and iPad, in order to maintain a growth path similar to prior years. On a positive note, the company reported an Earnings Per Share (EPS) of $13.81, beating its own forecasts on the backs of $54.5B of quarterly Revenue and a 38.6% Gross Margin.

Q1 for AAPL is usually a very strong quarter, primarily because it captures a lot of its revenue on the backs of strong holiday demand. However, looking at historical full-year figures for Revenue, Operating Income, Net Income and EPS (Figure 1.0), we can clearly see that last year (FY-2012) saw growth rates in all three metrics decline.

It has now become extremely difficult for AAPL to sustain growth of the kind that it did 3 to 4 years earlier, primarily because of the number of competitors that it faces today from Android-based devices. 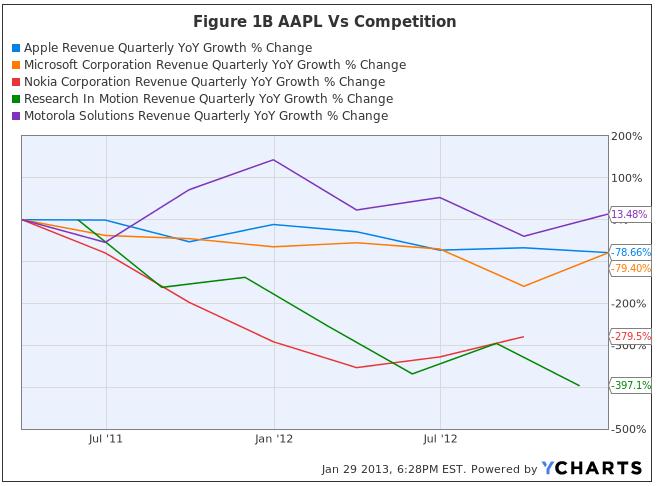 When comparing multiple stocks against each other, it’s best to compare apples to apples (pun intended!). While it is difficult to find an AAPL competitor that competes in exactly the same lines of businesses, AAPL has traditionally been compared against rival smartphone makers like Nokia (NOK), Research In Motion (RIMM), Motorola (MSI) to a lesser extent, and against Microsoft (MSFT) to some degree.

An analysis of competitor Y/Y quarterly revenue growth over the last 2 years also clearly indicates a downward trajectory of AAPL's revenue growth, even though it might be faring better than most of the other competitors.

Continue: Series 2 of 2: The Case for Value – Growth vs. Value Analysis on AAPL