However, while the cable and TV company continues to increase its overall share of the consumer market, its television business continues to experience a decline in subscription. This decline is partly as a result of customer reaction towards the firm’s price increases and enhanced equipment fees. Under these circumstances, investors may be wondering whether CMCSA is losing its customer appeal. Is the stock still a good hold, and worth adding to at these levels, or is it time to change the channel and tune in to some other station.

Let’s assess the various fundamental and valuation variables and try to address whether Comcast Corporation (CMCSA) stock is a good Buy, Sell or Hold.

For its Q1 2013 results, CMCSA reported an EPS of $0.54/share on revenue of $15.3B. The firm’s revenue increased 2.9% from last year, while EPS registered a healthy 20% improvement from Q1 2012. This was the third consecutive same-quarter upward trend in both revenues and EPS.

However, CMCSA's Free Cash Flow (FCF) increased only 3.3%, from $3.0B in Q1 2012. The less than expected FCF increase could however be attributed to a number of Capital expenditure items, including $263M in the newly acquired NBC asset (acquired from GE).

Of special interest to shareholders would be the performance exhibited by the NBC Universal division of the company. While the new asset delivered good revenue growth in its Cable Networks, Film Entertainment, Theme Parks and "Other" areas (4.6%, 2.0%, 12.2% and 33.3% respectively), growth in its Broadcast Television business declined by a significant -18.5% from last year.

Overall though, the results were pretty impressive under the current economic conditions. The company was also able to return $429M in dividends and $500M in shares repurchase to its shareholders during the quarter.

When valued on a TTM Price/Sales basis, CMCSA (1.78x) appears to be significantly undervalued compared to the rest of the Industry (2.55x). 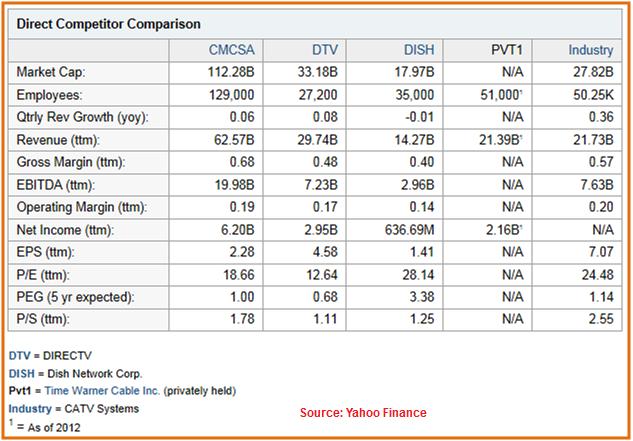 CMCSA has a much lower TTM EPS ($2.28) compared to DTV ($4.58) or the Industry ($7.07). Valuing CMCSA in terms of the relative compromise between its share price, EPS and earnings growth would therefore be a better measure of its relative valuation.  Compared on a 5-year PEG Ratio basis therefore, CMCSA (1.00) offers a more attractive value proposition than DISH (3.38) and other Industry peers (1.14). However, on a PEG basis, DTV (0.68) looks to be better valued than CMCSA.

From a technical analysis point of view, there's not much to say about CMCSA's 1-year stock movement chart except "wow!"  This stock is on fire, and exhibits the type of stock movement (steady move from lower left to upper right) that gets technical and fundamental analysts excited.

Today's price is 43% higher than the $29.79 at which the stock was trading exactly a year ago. And over the course of that period, the stock has steadily floated above its 50-day Simple Moving Average (SMA). Valuations and fundamentals aside, purely on a technical front this stock would be classified as a "table pounding buy".

Comcast's network is the largest in the US, with no other competitor able to deliver as many services. This ability assures CMCSA virtually unlimited future opportunities to increase its cash flow. The decision by Comcast management, in consult with that of General Electric Co (GE), to expedite the acquisition of NBC Universal was an extremely accretive move for CMCSA shareholders. The move, which created a $30B media giant, gave the company a great opportunity to finance the venture during a low-interest-rate period, while becoming a great catalyst for future earnings.

CMCSA's has an excellent set of core cable assets, which together contribute to over 80% of its EBITDA. This allows it to provide its customers with an end-to-end cable-TV-Phone experience. This strategic mix of phone, internet, TV and content broadcast assets is a definite catalyst for future growth because it gives Comcast a clear advantage over most of its competitors, including giants like AT&T (T), Verizon (VZ) and Time Warner (TWX).

On the negative side note, the company faces increasing pressure from emerging over-the-air entertainment providers like Google (GOOG) and Netflix (NFLX).  As TV, Phone and Internet media usage converges, more and more CMCSA customers will be looking to the internet to deliver them content, and GOOG and NFLX could end up chipping away at the company's loyal customers.

However, realizing this threat, CMCSA has inked deals with a number of content providers, such as Disney (DIS) and CBS (CBS), that allow Comcast customers access to a vast library of top-quality content using CMCSA's internet/phone/cable networks.

Comcast's one big failing has been its inability to grow a credible wireless asset. Its partnership with Verizon (VZ) was a strategy aimed to fill this gap; however this is not a substitute for owning core wireless assets, especially given that CMCSA and VZ compete in other areas. A longer-term solution to this weakness must be found.

(More News: What's on the Horizon for Verizon? Is VZ Stock a Buy, Sell or Hold?)

Of all the drawbacks to owning shares in CMCSA however, one would have to say the biggest one would likely remain the dual class share structure, which allows the founders (the Roberts family) an unhealthy 33% controlling/voting interest in the company.

In our opinion, based on the analysis above, CMCSA is a STRONG BUY. However, it is best to wait for a pullback before buying such a stock that has surged close to 50% in the last year alone.