Anyone with a passing interest in the Tablet, PC and Smartphone sector will know about the "wars" – competition wars, marketing wars, price wars, product launch wars, innovation wars – that are going on in that sector.

However, what might be less known is the impact these wars are having on Semiconductor/Chip manufacturers like Micron Technology Inc (MU) and competitors like NXP Semiconductors NV (NXPI) and Intel Corporation (INTC), who are themselves warring for business from giants like Apple, Samsung, Dell and Microsoft.

Based on the stock price chart above, it is clear that Micron Technology’s shares are in an upward trend, while both of its competitors seem to be either losing momentum (NXPI) or moving sideways (INTC).

Shareholders and potential investors of Micron Technology may be interested in knowing what the future holds for their investment, and whether MU stock rates as a buy, hold or sell?

Let's review some of the key stock fundamental and technical data for Micron Technology that might help answer whether MU stock is a good buy or sell in 2013. 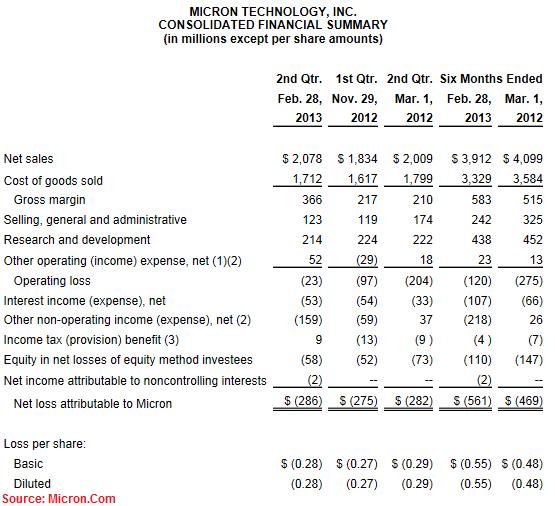 The results reported were not necessarily all doom and gloom. A bright spot for shareholders is that the company reported significant improvement in Gross Margins, from 12% in Q1-2013 to 18% in the most recent quarter. More encouragingly for shareholders to note is the fact that these improved margins were applicable to both NAND Flash as well as DRAM product line, and were attributable to decreasing costs of manufacturing.

Another ray of sunshine in the loss-making quarter was related to Sales revenue. DRAM product sales revenues in Q2-2013 were up by 24% over Q1-2013, mainly on the back of a 38% jump in volume. However, the company did admit to an approximate 10% reduction in average sale price. Similarly, Q2-2013 saw an 8% improvement on NAND Flash products over Q1, with an encouraging 13% volume improvement. The only damp spot was the NOR Flash product line, which saw a 14% decline in revenues compared to last quarter.

Overall, investors liked what they heard on March 21 as the stock was handsomely rewarded, closing at $10.04 on March 22 – up by 10.69% from its Mar 21 closing price of $9.07.  The average 10-day trading volume for the stock, up to and including the day the results were reported, was 35,019,549 shares. However, the day following the result announcement 99,677,962 shares changed hands – a spike of over 180% of the 10-day average volume! Yet another sign of investor confidence in the earnings announcement.

Based on Morningstar data, MU's current valuation appears to be generally in line with the average valuation for the Technology and Semiconductor Sector/Industry. On a Price/Earnings basis, MU (-9.0x) is valued at a slight discount to the Industry average (-8.2x). However, the company is trading at a significant discount when compared against the S&P 500 average P/E of 16.2x.

Overall we could summarize that, at current prices, MU is a relatively (to the Industry and S&P 500) and comparatively (to some of its peers) fairly valued stock.