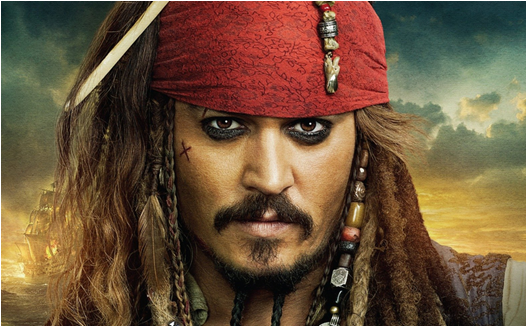 Optimism ran high as executives and stock investors expected this movie to be another summer blockbuster.

The movie was a disaster, with dismal reviews and poor audience attendance.

Walt Disney is expected to lose anywhere between $160-$190M because of poor ticket sales on The Lone Ranger.

Looking at the Disney’s stock performance in the chart below, relative to competitors Dreamworks Animation SKG Inc. (DWA), Time Warner Inc. (TWX) and Twenty-First Century Fox Inc. (FOX), one might be forgiven for ignoring the fact that despite the Lone Ranger flop, this is the same company that has also delivered blockbusters like Avengers and Iron Man 3 to its loyal fans.

While the stock has been up over 27% in the last year, it has significantly lagged its other three competitors.

Investors may now be wondering what the future holds for this icon of the entertainment world.

Should investors buy Disney stock? Or sell and seek opportunities elsewhere? Is DIS a good buy, sell or hold? 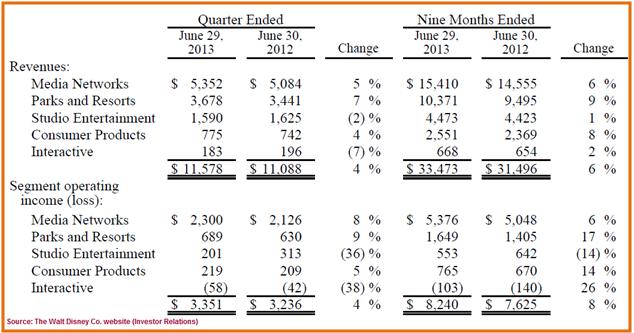 This spurt in revenue saw the total Segment Operating Income grow by 8% Q/Q.

The most profitable of the company's Operating Segments however was Parks and Resorts, which saw a 9% Operating Income improvement Q/Q on the backs of a 7% increase in Revenues.

The Studio Entertainment Segment was one of the least profitable operating segment in the company.

While the company did take a financial hit of between $160M to $190M on the Lone Ranger, some might argue this is not a huge event given the particularly "hit or miss" nature of the movie making business.

However, there was a 2% decline in the company's revenue that it has attributed to lower box-office sales ($1.2B) generated by Iron Man 3 compared to the $1.5B generated by The Avengers a year ago.

Operating Margin in the segment declined by 36%.

The least profitable of Disney's Operating Segments however was the Interactive business, which saw a 7% decrease in revenue accompanied by a 38% decline in Operating Income.

DIS struggled in this segment due to poor game and console sales, as well as the lack of new titles released this quarter.

On a year-to-date basis, however, this segment appears to have improved, with losses declining to -$103M compared to -$140 last year. This represents a 26% improvement in operating results.

DIS currently trades at a Price/Earnings valuation of 19.7x, which makes it 20% more expensive than the Industry Average for this valuation metric.

Competitors TWX and FOX are are valued lower at 18.1x and 11.7x respectively.

On a Price/Book valuation, DIS is trading at 2.7x its Book Value. This puts it almost in line with the Industry Average (3x), but still slightly higher than competitors DWA (1.8x) and TWX (2.1x).  However, on this valuation DIS is much cheaper than competitor FOX (4.6x).

On a Price/Sales valuation, DIS (2.7x) trades fairly in line with the Industry Average (2.4x) and its competiton FOX (2.9x) and DWA (3x). However, based on P/S valuation, TWX (2.2x) is the cheaper stock amongst the peers reviewed in this analysis.

On a Price/Cash Flow basis, DIS (14.3x) trades in line with TWX (14.8x) and the Industry Average (14.1x). However, it is cheaper than FOX (26.5x) and significantly cheaper than competitor DWA (61.3x). DIS also has a comparatively reasonable PEG ratio (1.2) that is in line with TWX (1.1) and FOX (1.8). This compars significantly well against DWA (7.7), indicating investors are paying a much lower price for future earnings growth in DIS.

The stock began this year with momentum, gaining on accretive headline news such as its distribution agreement with AT&T U-verse (Jan 2013), a strong showing on its Q1 2013 earnings (Feb 7, 2013), its partnership with Verizon and ESPN (July 2013) and good Q3 results.

While the stock received a lift as a result of hits such as Iron Man 3, it also was hit by less than stellar showing of movies like Lone Ranger.

From Jan to April, the stock traded above its 50-day SMA.

Currently, the stock seems to be forming yet another base close to its 100-day SMA.

Investors should watch to see if the stock holds onto its gains and moves higher, thus breaking the apparent pattern of consolidation seen in the chart.

However, if the stock breaches support here (at its 100-day SMA) it could dip down to the $60's level which coincides with support at its 200-day SMA.

Although the company has a vast array of priceless entertainment assets, DIS's Media network is perhaps the most unrivaled collection of cash flow generating assets that no other peer possesses.

And unlike most of its competitors, Disney is able to deliver a diverse range of entertainment options to its subscribers and clients, via its media empire.

And these assets will continue to be a favorable catalyst for future growth.

As global economies start to rebound, entertainment mediums such as Theme Parks and Resorts are likely to see resurgence in visitor population.

With a lot of its major capital expenditure already behind it, DIS is ideally positioned to capture the lion's share of that expected increased visitor ship, especially as a result of investments in China and Europe.

As is indicated by the dismal showing in its Interactive segment, DIS faces a challenge breaking into newer entertainment marketing and distribution streams. While it has proven time and time again that it is capable of producing block buster movies, its ability to monetize those movies beyond the initial theatre exhibitions is challenged by newer and cheaper paradigms like Netflix. However, the company's announcement that it is considering producing exclusive content for distributors such as Netflix and Amazon could be a great long-term move.

The ongoing plague of copyright infringement and piracy, especially in the digital world, can pose a serious longer-term threat to the company's DVD and other online digital media content revenue. As a company, and a leading participant in the industry in general, DIS will need to take concrete steps to combat this threat or face continued siphoning of its revenue.

Based on the above analysis DIS is a MODERATE BUY. Since its revenues hinge largely on consumer discretionary spending, a further upturn (or deterioration) in global economies could potentially change this investment thesis.

Sound off below. What do you think are the future prospects for Disney stock?

Looking forward to your comments