Go Short on Lululemon (LULU) Stock. Their Run is Over. 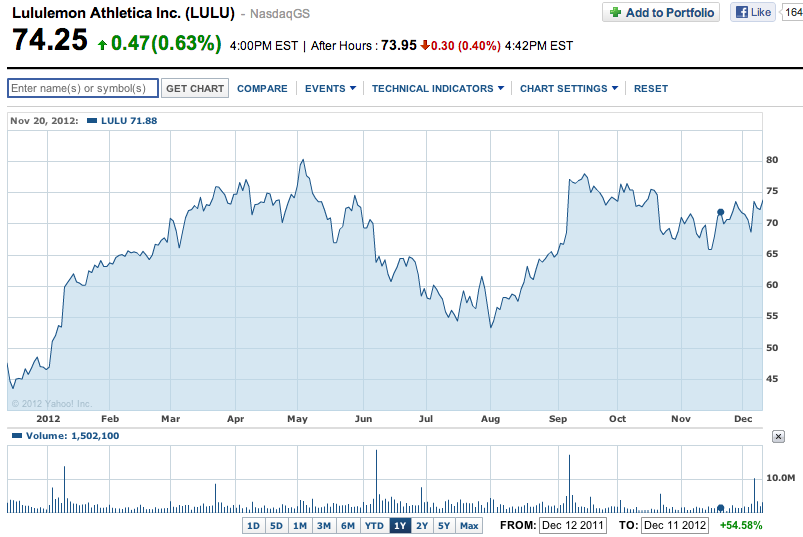 Today, if you Google “short Lululemon” you're going to get overwhelmed with images of beautiful women wearing running shorts. Not necessarily a bad thing, but not what I was looking for. I was interested in seeing who else was writing about shorting or selling Lululemon stock (LULU), but only found a few mentions. Seems shorting LULU after a year-to-date stock appreciation of 51% is going against the trend, but it is the right thing to do. Lululemon (LULU) is overpriced and the company is suffering from poor leadership management.

Allow me to introduce Chip Wilson, the founder of Lululemon Athletica. Chip is a bit of a controversial guy and abruptly stepped down as “chief innovation and branding officer” at the beginning of 2012. According to a Business Insider article (12 Utterly Bizarre Facts About The Rise Of Lululemon, The Cult-Like Yoga Brand), Chip's mishaps "include favoring child labor, his disdain for the ability of the Japanese to speak English, a love of Ayn Rand, and his opinion that The Pill created a generation of divorce-shattered women now seeking empowerment through yoga".

So what's the big deal? Chip already stepped down and is no longer actively involved with the company. Unfortunately, his imprints are much harder to erase. For example, Chip put in place the Landmark seminars, to which select employees are practically still forced to attend. These seminars are essentially leadership workshops that some have said turns employees into walking zombies – here's a basic Google search on this issue for your entertainment.

I think it's also helpful if we take a peek at Glassdoor, a website where employees review companies they work for. Seems Lulu barely scrapes a 3 star rating. From a ratings perspective, they score the lowest amongst their competitors. Such reviews like “Company operates like a sorority” and “if you are not one of the brainwashed, they will simply fire you” are cherry pickings of mine, but they are not far and few between. By this point, you can see the picture I am painting: Lululemon needs to do a core value shakedown and restructure how they manage both their employees and the company.

Lululemon's competitors are chomping at the bit to snatch away their market share. Nike, Nordstrom, Gap and niche retailers were sideswiped by the success of Lululemon’s stretchy pant line. They have finally responded and are mounting a comeback. Gap plans to launch 50 Athleta stores by the end of 2013. Nordstrom is pushing their line of athletic yoga wear which beats up Lululemon on price. Nike, and I should also mention Under Armour in the same breath, still dominate the boxer brief market and a look at Lululemon's customer reviews of their boxer brief lines aren't pretty. The cost of entry into the yoga apparel business isn't high. And in terms of quality, their competitors are competing effectively. Loyalist will argue that such a comparison is similar to comparing Apple computers to Dell, but I disagree. This is Dell versus HP.

Caption: 2012 proved to be a wild ride for Lululemon (LULU). Source: Yahoo Finance.

On another note, just looking at their Price-to-Earnings ratio (P/E) raises eyebrows. Their current P/E is at 45. Let's compare this to Nike (NKE) at 21, Gap (GPS) at 15, and Nordstrom's (JWN) at 16. This is not sustainable. Lululemon's much needed reality check is coming soon, and this speculative bubble is going to pop. Adding to this, although their top line exploded during the last few years, it has since taken a downward turn and slowed significantly. This is a sign that they are maxing out their market and the impact of opening new stores will be much less.

The frenzy for Lululemon is going to dwindle. The superstar stock that shot up as one of the best buys is running on a high that won't last much longer. Unhappy employees, competition coming in strong and a quick look at their numbers lead me to believe that shorting LULU is the best option. Just because your significant other looks darn good in a pair of Lululemon pants doesn't mean much when their stock is trading incredibly far beyond its potential. Overstretched? I think so.