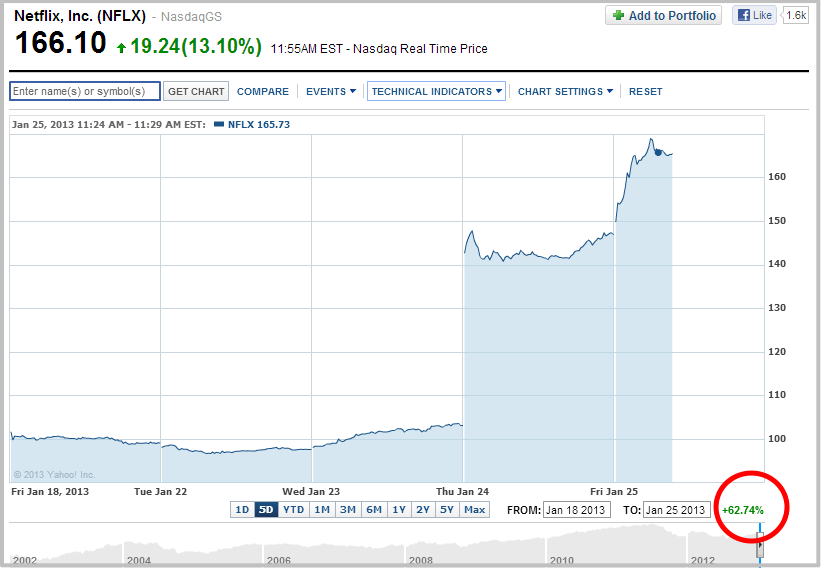 The Netflix (NFLX) Story – Can We Believe it? Is Netflix Stock a Buy, Sell or Hold?

When multi-millionaire Carl Icahn took a 10% stake in Netflix (Nasdaq: NFLX) last fall, it is unlikely he ever dreamed his 5.54M shares would see a meteoric jump in value of over US$450M in such a short span.

A day after Netflix announced better-than expected Q4 results, handily beating its own forecasts, the stock was trading up over 37% in mid-day trading on the Nasdaq on Jan 24, 2013. In the last four days alone, NFLX stock has soared 63%.

The question now is this: what should average investors do? At the current price target, is Netflix stock a Buy, Sell, Hold or even a Short?

Let’s go over the analysis.

Fundamental Analysis – A good quarter, but a bad year!

Netflix Inc pulled a big surprise on Wall Street when the video streaming company announced that it had increased its subscriber base, both domestically within the US and in international markets, by a whopping 4 million subscribers! These numbers include 2.1 million new US customers, as well as 1.8 million new international subscribers during Q4, winding up 2012 with a solid subscriber base of 27.2 million members.

That alone was enough to set the stock on fire as it shot up 35% in after-hours trading on the Nasdaq on the day of the earnings announcement. The surprise to analysts was largely due to the fact that management had warned investors earlier of a potential Q4 loss due to expansion costs it incurred to break into the Scandinavian market place.

But despite strong competition from the likes of Amazon.com and Hulu, NFLX still managed to report $7.8M in net income for Q4-2012, translating to approximately $0.13/share (diluted). Wall Street analysts had instead expected a 13 cent/share loss. And given the slow growth environment in the US and globally, the company still managed to report revenue of $945M, which was an 8% rise when compared to the same quarter last year. This marks 3 consecutive years of revenue growth, as well as 3 consecutive Q4's of increasing revenue. 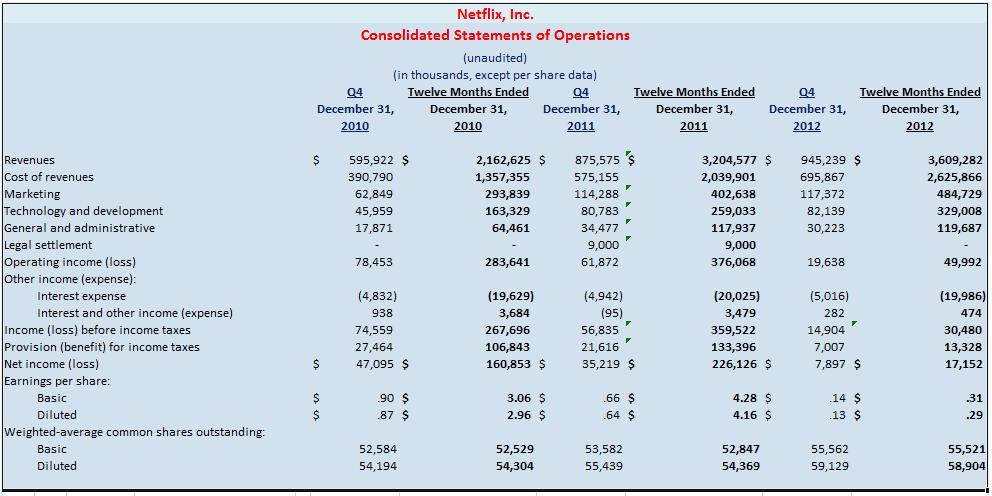 On a full-year basis, NFLX reported $17M in net income for 2012. A year earlier, the company had reported earnings of $41M, with its revenues at $875.5M translating to approximately $0.73 per share. The Jan 23 Q4-2012 results, which also saw increased costs for the company, represent a full year net income decline of nearly 92% compared to 2011.

All in all, a significantly good quarter that translated into a comparatively dismal year!

Continue: Forward Looking Stock Analysis – Is Netflix a Hold in 2013?