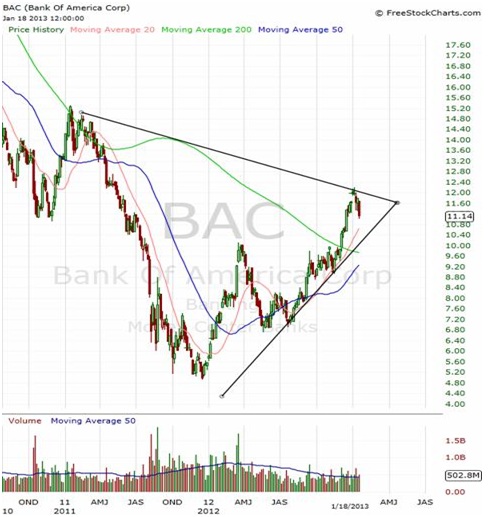 While we acknowledged the risks facing Bank of America's upward momentum, MarketConsensus still rates BAC shares as a buy and technically speaking the stock is on an upswing that would see it surpass analysts' price targets.

We wanted to point out that the stock is trading above the 20-, 50-, and 200- Day Moving Average. The higher highs and higher lows confirm the uptrend here. The above symmetrical triangle formation has been put in there to assist investors in identifying the point where the stock will break on its bullish upswing; it will be just over the triangle formation according to our chartists here at MarketConsensus News. 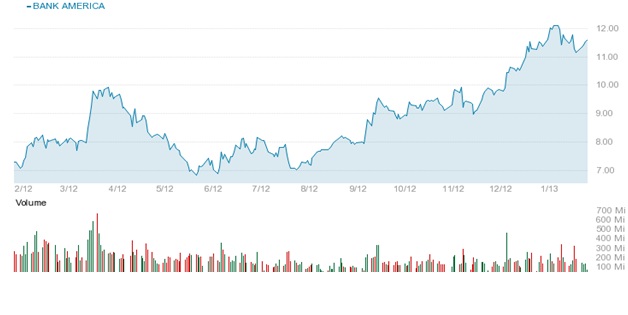 As can be seen from the chart above, BAC stock price has risen 58.23% over the last year making it the best performing bank stock in the Dow despite all the negative press. There is no denying that BAC has fallen off from its prime time years during the 80s and 90s and also for a brief period in the middle of the last decade. Nonetheless, the question on investors' minds is whether the Big Four bank will have a turnaround in 2013.

The nation's second largest bank has realized that less is more. Unlike Amazon.com Inc. (AMZN), BAC is now a highly profitable franchise that has made less deals than in previous decades. Top management has realized that focus is better than deal blitzes and M&A sprees. This is how BAC has managed to boost its market cap to $124.81B after the losses it suffered during the wheeling and dealing days of former CEO Ken Lewis. The 46.51 P/E value speaks to this expectation of high growth through increased focus.

Furthermore, the capital raises is good news for BofA investors, as the bank now has a Tier 1 common ratio around 9.25% which is well over the minimum of 8.5% that the firm has to maintain.

A Decline in the Allowances for Loan Losses

Increased earnings growth and higher profit margins is what BofA anticipates since the bank has reduced its allowances for loan losses going forward.

Bottom Line: Investors stand to profit from BAC in 2013 and beyond

The economic recovery and rising demand for mortgages make a good case for investors to hold BofA stock as we have previously recommended. Moreover, the bank has committed itself to cost cutting measures that will boost its net income.